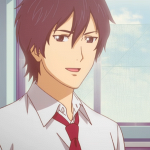 I'm Takashichea, a member of Team W.I.K.I. Nation from Anime Vice. I'm a longtime wiki editior who worked on Beelzebub for Anime Vice. I came here to help the other wiki editors. I add as much info as I can while managing my other wiki job at Anime Vice and school.

Annabanana is my great partner at Anime Vice. She got me into Beelzebub. In fact, she got me into a lot of anime just like my little sister. Over there, Anna had a ton of Beelzebub images. I hope to share that with the good folks here. Here are some images she posted.

Status: I'm not active on Beelzebub Wikia. My love and commitment goes to Anime Vice, Sket Dance Wikia, and Magi Wikia. I was going to say Rave Master Wikia. I didn't give it enough commitment. Sorry Mega.

In Anime Vice, I had a lot of projects. I'm still new to the wikia sites. With school and Anime Vice, I have to manage my time a better. Sometimes, I end up overworking. I work on episodes, volumes, characters, and more with my teams. During Fall 2011, I did the weekly reports to talk about the anime and its wiki work for the sake of my team.

Retrieved from "https://beelzebub.fandom.com/wiki/User:Takashichea?oldid=20975"
Community content is available under CC-BY-SA unless otherwise noted.